From Quebec City we made our way to Saint John, NB. A sleepy, quaint little city. We were by the harbor area and were literally there for a night and breakfast before making our way to St. Andrews by the sea about an hour away to go whale watching.

What we saw at Saint John was very calm and serene and beautiful. The harbor areas had a bunch of restaurants right on the water with patios which would be great for an evening out. The one thing that struck us was the lack of people! It was eerily quiet for a Monday morning. Coming from Toronto, downtown Saint John looked positively deserted!

We had our breakfast at Cafe Magnolia, where we keep true to our eggs Benedict and French toast theme. The food and coffee was amazing! Though in hindsight sweet hubs corn break french toast was way more tastier and I should have gone with that! Nonetheless my Eggs Benedict with avocado and sweet potato was excellent. The egg was poached to perfection and the contrast of the creamy avocado and crispy sweet potato was delightful. If you are in Saint John, do check out Magnolia cafe. 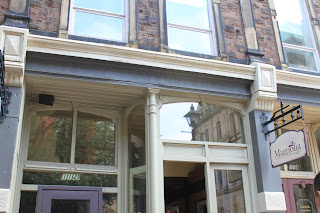 
Our next stop was Saint Andrews, an hour away from Saint John, which is known as the whale watching capital on the NB side on the Bay of Fundy. The bay of Fundy is considered a world heritage site and is a bay on the Atlantic coast between New Brunswick and Nova Scotia , with a small portion touching Maine, US.


There are some things about whale watching in the Bay of Fundy that you should know.


1. If you are expecting whales jumping out of the water like on national geographical then you need to temper your expectations dude!

1. Whales breach most often during mating season and like every smart creature in the planet, they do the 'do' off the warm coastal sea months of Hawaii and or California during winter. They come to Canada to feed so less chances of breaching! Sorry.

2. The type of whale matters. Humpbacks are the stars of the ocean. They are the ones who do the photogenic pirouettes in the air. They are champion breachers and show their gorgeous tails and have very distinctive flukes ( the water spouts when they come up for air). Most other whales only expose their dorsal fin and back when they dive. In the bay they do get humpbacks but they had not arrived as yet. The best time to see whales is August and Sept so they were behind schedule (damn , dastardly whales!). If there are humps in the area, then you are in for a treat! Watching a tail swoop out of the water is a spectacular sight. The absolute best place to see whales in the Bay of Fundy is from Nova Scotia is near Brier island, Nova Scotia. It is accessible by two ferries from Digby , which you can take a ferry too from Saint John, NB. Its the furthermost tip of the bay and a lot of different whale species come there including humps. In fact, the day before we went, this happened. Lucky bastards!

It is possible to appreciate the magnitude and size of these creatures, but kids may find it a bit too abstract. The boats do try to make it very interactive and there are proposes and seals and sharks ( yes we saw basking shark!) but shark breaches are incredibly fast and at times like these, you wish you had the national geographic slow-mo filter!


We booked our tour with Island Quest Marine, who had great trip advisor reviews and we found them to be pretty good! They had biologists on board and were very enthusiastic about whale sightings and had a session for children where they could touch star fish, sea urchins and clams found in the bay.
The cost is $56 for adults and $38 for children under 16 and they have two trips a day at 10.00 am or 2.00 pm. The entire trip was about 3 hours so take snacks! They did serve a delicious salmon pate at but you will get hungry. What we found out later at the harbor was that there is another company which dresses the kids as pirates. The company is called The Jolly Breeze, So if you have kids, that may be worth checking out. I don't know how good they are, but if the kids are happy, you are happy right;)


No matter what, once you are on the water, the views are breathtaking. My god! The vista is unbelievable. And you really do see how the tides change over time. At low tide you can walk miles out and when high tide hits all of of it is covered with water. 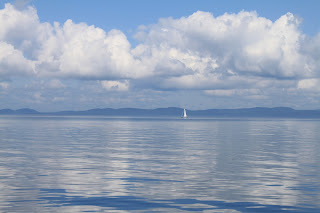 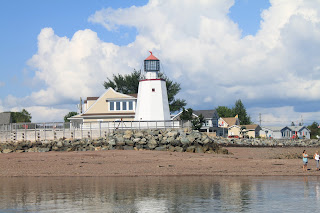 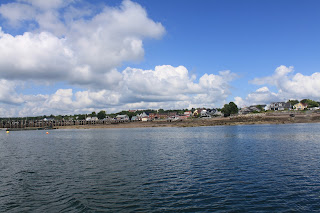 Being on water is my catnip and I experienced such deep joy just bring in that boat. For that alone, I would make the trip out on the whale watching boat.

After Saint Andrews we made our way to Moncton, which is a..... city. Its really small and downtown finishes and end before you know it! The only thing we thought was pretty cool is that every day due to surging tides of Bay of Fundy, a wave or tidal bore, comes through the Peticodiac river, which streams through Moncton. You can see it from a park in downtown and they post the times of the tidal bore in advance. The Tidal bore unlike a train, may not be exactly to schedule so give or take 20 minutes before and after is a good estimate. 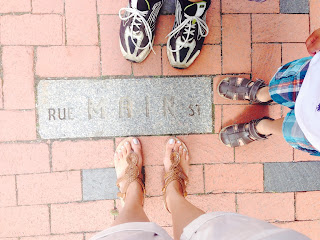 "I am forever walking upon these shores,betwixt the sand and the foam, The high tide will erase my foot-prints, and the wind will blow away the foam.But the sea and the shore will remain forever" - Kahlil Gibran. 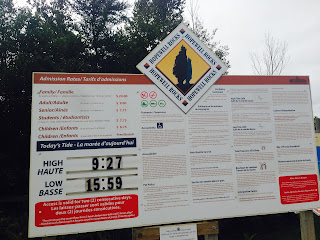 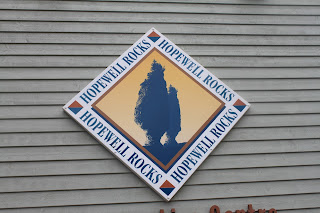 There are no words to describe how beautiful Hopewell Rocks are. You cannot imagine the sheer scale of this place. Hopewell Rocks or flowerpot rocks are these giant rock formations sculpted by the changing tides. At high tide, the rocks and the sea caves are covered with water and in low tide, you can walk the ocean floor. 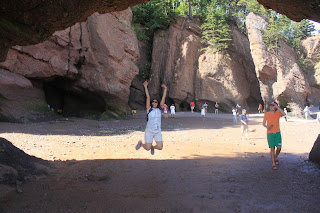 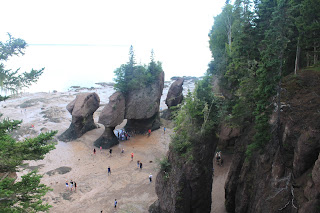 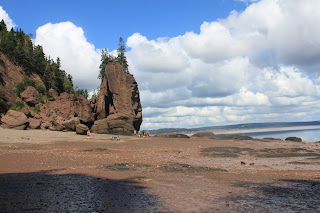 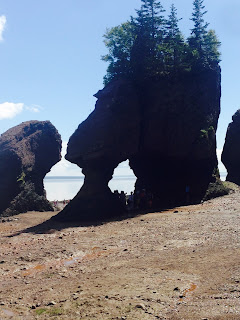 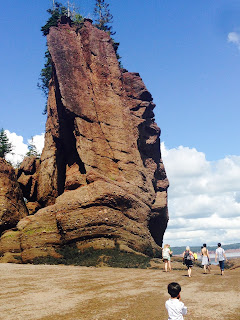 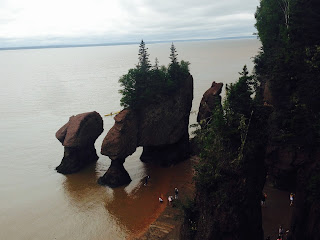 They have a schedule up for each day for high and low tide. Realistically, you could see both in one day. High tides in august and Sept are in the morning and the low tide with the lowest point, hits around late afternoon. You could go down to Fundy national park or Alma, or you could do it over two days. Or you could see High tides the next morning like we did. Hopewell rocks are about 30 minutes from Moncton and your ticket is valid for entry on two consecutive days. The ticket is $9.00 for adults, $6.75 for children between 5-16 and children under 4 are free. We spent over three hours there and were amazed by the scale of this natural wonder. LP was running around the sea caves and each bend brought new delights for us to explore. The water recedes pretty far out and you can see hermit crabs and sea snails in the water pools in the rocks. The walk from the welcome center to the rocks is about 15 minutes and there is a shuttle which costs $2.00/person, children under five are free.

On a practical note, don't wear flip fops. The ocean floor is squelchy and there are a lot of muddy puddles and your flip flops will get stuck.  They have a washing station at the low tides cafe where your sneakers (and hands/feet) can be washed, or if you have wellingtons/rain boots they should work the best.

Hopewell rocks are the type of places that make you wonder about unseen forces whose power you cannot comprehend and are amazed by glimpses of their omnipotence. Hopewell inspired my soul and reminded me about the power and beauty of the natural world. the sights and sounds of Hopewell Rocks will endure in my mind for a very long time. The native Mi'kmaq have a legend that the whale god angry with the Mi'kmaq changed their leaders into rocks. They may just be right... 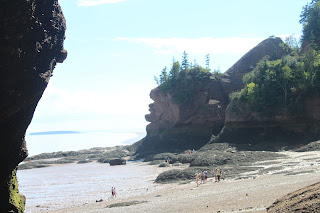 On route to seeing the high tides the next morning,we stopped for breakfast at the Cinnamon soul cafe in Hillsborough. I had the traditional waffles with fresh fruits and the fruits were so fresh! and even the batter was home made and super fluffy. it was a good place to stop on our way to Hopewell rocks. after we saw the tides we made our way to Alma with a pit stop at Cape Enrage where there is light house and a view of the Atlantic ocean. They have gorgeous views ( are you surprised?) and a functioning lighthouse. They also have a beach area which is pretty cool. and if you have time, you can hunt for fossils off the rock cliff and beach. 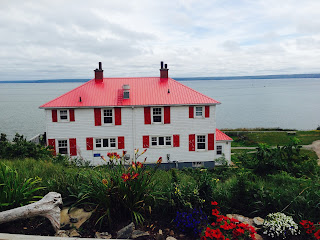 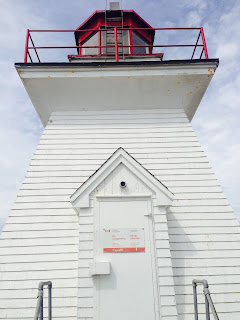 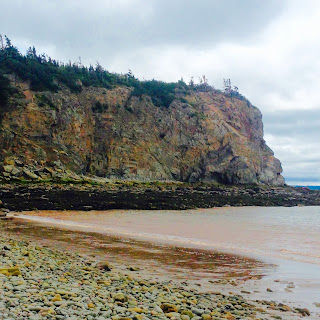 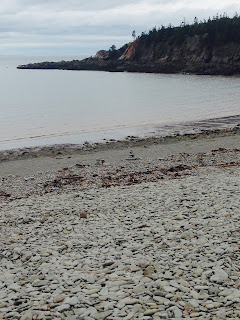 They do charge a fees ($5.00/adult) and in early summer you can rappel and zip line. You must call ahead to book for zip-lining as it is extremely popular. It can certainly be a nice little spot to explore.

Alma is a small village on the outskirts of Fundy national park and is a good pit spot to rest up and eat. They have a beach which at low tides is a great place to enjoy the warm weather. A specialty in Alma is the Alma lobster shop . It's a small establishment that catches their own lobsters and has a restaurant. the lobster dinner and lobster rolls there were incredibly fresh and delicious. the bun was just crisply enough to hold the creamy lobster sauce. its a definite must do in Alma. 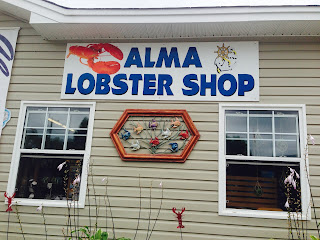 Fundy national park is another great place to visit and if you are an avid hiker, you are in for a trea1 they have multiple hikes ranging from 30 minutes all the way up to those that criss-cross multiple coastal and mountainous terrains for longer periods through untouched Arcadian flora. We did two small hikes with LP, Dixon Falls and Shorehaven. One took us into an enchanted forest . it was a bit rainy and the greens of the forest were magical. Shorehaven took us to a rocky beach where LP had a great time hunting for snails.


Fundy national park also has an heated outdoor salt water pool overlooking the bay. Its wonderful. imagine swimming in a heated pool while overlooking the vast ocean beyond. what a treat. swimming is included in your admission,so if the weather is good you should try it! Who needs the out door pool at Bondi! we have Fundy!! 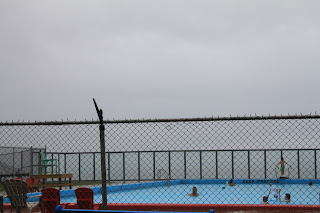