This year, sweet hubs, the little prince and I, finally fulfilled a long cherished wish: visiting the Maritimes. Our first pit stop was Montreal where I got to hang out with my two 'lobes'; my two besties.. and it could not have been a better start to my trip.


We started our day by going for a leisurely stroll in Monkland Village. We were there for their summer festival  and had the most awesome brunch at Prohibition. 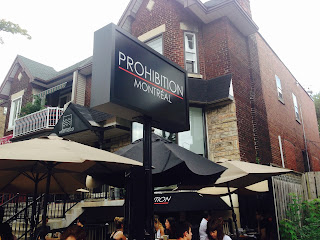 I only have one thing to say. Oh MY God. Total food coma. I had the fried chicken and french toast topped with locally sourced dark maple syrup. The chicken was fried to perfection. Crispy on the outside, moist and succulent on the inside and just the right amount of salt to offset the sweetness of the french toast. Speaking of the French toast, it  came with a smoky maple syrup on the side which added an amazing je ne sais quoi (I'm in Montreal yo!) to the experience.  Oh and if your mind isn't blown already,  the french toast was made with scrumptious, thick slices of Challah bread. Goodness! If this is not food porn, I don't know what is!
Sweet hubs and preggo bestie had eggs Benedict with feta cheese and hot  pepper oil ( preggo bestie's swears by it) while twin bestie had lox and  bagel... and all of us were licking our fingers.

I could eat that chicken and french toast combo any time and I kid you not, I am salivating right now thinking of that chicken...

The highlight for me was see my preggo  bestie  glowing and looking so incredibly beautiful. I almost cried seeing her with that adorable belly and being so proud of the woman she is and the mother she will be. For me, the moment that defined my visit was when we introduced the
little prince to my future little munchkin niece..


We ended up staying in Montreal for an additional day and had a roof top BBQ at twin bestie's beautiful house in the Plateau. On our way, we showed LP my old hood and relieved some bitter sweet memories.. miss you dost.

After Montreal we made our way to Quebec city.


Sweet hubs and I, a very, very long time ago had visited the Aquarium du Quebec in Quebec city in our hay days of youth and let's just say, nostalgia had tinged our memories with a rose tainted hue. I remembered it much better and more fondly then it actually was.  To be fair, there were a lot of promising positives. The layout is perfect for young kids. There isn't a lot of walking and its a pretty small place. The shows were fun and there were a number of opportunities for sensory experiences. LP loves touching the sting rays, the star fish and sea urchins. The seal and walrus shows were pretty standard but for a kid they were fun. Be warned, all the shows are in French so pretending to laugh even if you don't understand might make you feel less like an outsider. Also, nod your head at infrequent intervals ;)
The fish variety was not impressive and the under-water tunnel was quite tiny ( it looks misleadingly bigger in the pictures online). I have been spoilt by Ripley's in Toronto, so I do realize the comparison is unfair. I suppose for the price ($18.00 for adults $9.00 for children over 3), it was OK. I would give it a B-. 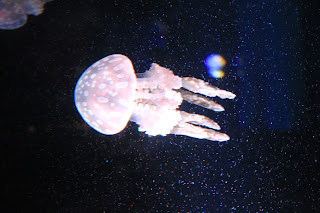 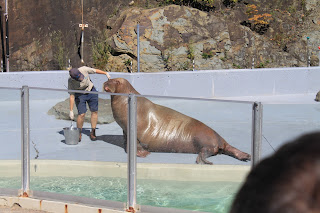 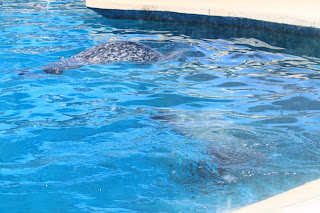 I was a bit ticked off when even after repeating my order in English and french and using sign language to point at the pizza I wanted, they still got it wrong! How can you mess up cheese pizza and poutine?!?  What made me EVEN more grumpy, was that I paid 40 bucks for the wrong and cold pizza slice, and really, really bad poutine ( bad poutine in Quebec is an unforgivable travesty!)  Yes, I'm still pissed of!!

The saving grace was the magnificent view of the St Lawrence river. It kinda-sorta ( OK may more than just a little bit) compensated for the terrible food! 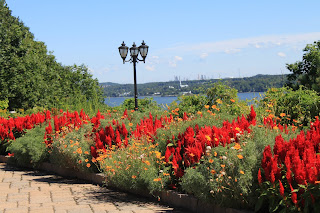 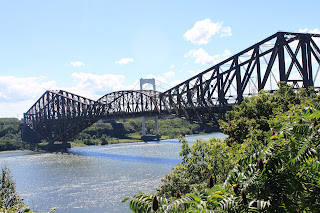 While the aquarium was a bit disappointing, Quebec by no means failed to deliver. We had forgotten just how pretty old Quebec can be. The twisting cobbled stones streets, the stately old buildings and of course, the imposing Chateau Frontenac at the pinnacle are breathtaking. Old Quebec city  is a historical neighborhood with buildings dating as far as 17th to 18th century and while you are there, you can easily picture your self in some  quint old town in France or Spain.

It has an old world charm with musicians playing at every corner and cobbled, meandering streets overlooking the serene St. Lawrence river. In summers, old town takes on a festive ambiance with tons of people and a secret in every corner. The entire area is relatively small and easily walk-able although it is uphill, so I suggest leisurely strolls ! Quebec  has recently invested shit loads of money on developing  a very charming promenade alongside the St. Lawrence and while we did not get a chance to stroll along the river, I bet it would be a great picnic spot for watching the  pretty, white sailboats languidly cruising on a hazy summer day. 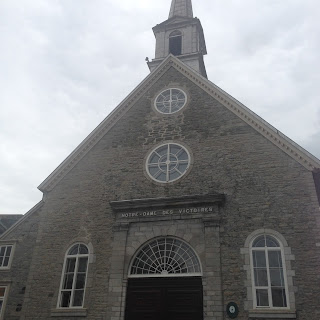 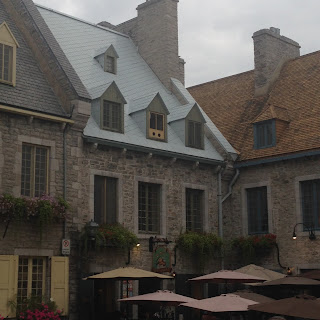 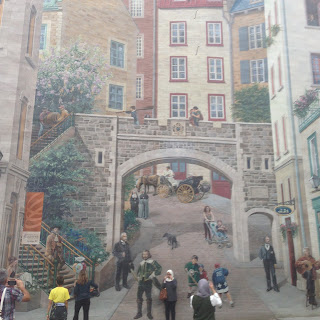 Old Quebec city is incredibly beautiful and so are the areas around it.  Iles d'Orleans, an island minutes from downtown is heavenly with the best strawberries you will have in our part of Canada. We did not get a chance to go there this time, but I have very, very fond and precious memories of my time there when I lived in Montreal. It is advisable to know at least some french in Quebec city. So remember your basic phrases: Ou est les tiolettes? (where is the bathroom), plus de vin et fromage s' il vous plait (more wine and cheese please!) and of course, Merci! Or keep Google translate handy on your phone :)  Luckily, Old town is a very popular tourist spot, and most of the restaurants and shops in and around there have staff that speaks and responds very amiably in English and French. So Amusez vous! and don't forget to hum La vie en rose in your heads while you stroll with your beloved down the romantic streets of old town Quebec!

*For those that are worried about language, Montreal IS perfectly bilingual and very rarely will you meet the stereotypical Quebecois who will bitch you out for speaking English. Montrealers are very friendly, so strut away!